My mission? Find a frame for a 12-inch by 12-inch photo print I bought at a street festival last fall. Since this is a nonstandard size, I knew I would have to purchase a custom frame for my item.

My first stop? A major arts-and-crafts supply store that offers custom framing. Armed with a 50-percent-off coupon, I thought I could easily get my item framed for around $60. After all, it was already matted —all I needed was the frame. I was so sure that I’d get a decent price that I brought my print to the store, expecting to return in a few days to pick it up. To be honest, I didn’t really care for the store’s selection of frames, but I was willing to settle for one that looked decent because 50 percent off seemed like a great deal. That was, until I got the price quote. I don’t recall the exact amount, but it was around $130. I took my hummingbird photo print and returned home.

I didn’t bother going to other major or locally owned framing shops, because I figured the results would be about the same. Instead, I turned to an online resource I’d used before in a similar situation: SendAFrame.com. The company may not have the fanciest website, and you may never have heard of it before, but it’s a great place to go if you need a custom frame.  Plus, you get a product made in the USA.

SendAFrame.com is a lot like quick-service restaurants where you build your own meal. In the website’s custom-framing section, you pick the size of frame you want, the material you want it to be built from, the frame width and the frame color. You choose whether to have a matte included with your frame, and what shape, size and color it should be. Want a mounting board? You can add that to your order as well.

Have a question? I got a quick answer to mine from a friendly customer service representative using the website’s chat feature. 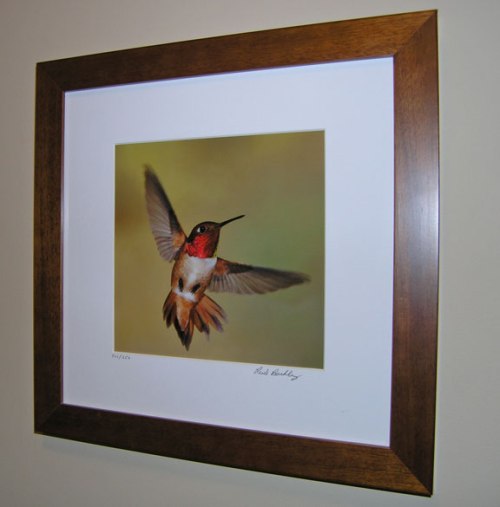 Here’s my print in the frame I purchased from SendAFrame.com

After you place your order, SendAFrame.com builds your frame by hand. My item was constructed and shipped quickly. The only criticism I have is that the instructions enclosed with the frame were confusing, and the metal hanger we had to attach to the frame was of poor quality. The latter is easily rectified by purchasing your own hook at a local hardware store.

If your order totals $49 or more, it ships free. My order was close to that price at $42.50, so I got a small photo album from the site to get free shipping. If I’d gone with pay-your-own shipping, my order total would actually have been higher than it was with the photo album.

Speaking of photo albums, SendAFrame.com has a good selection of those as well. I’ve previously purchased a product from their “build-your-own” photo album line. This allows me to select the album, which has a three-ring-binder style, and then choose the photo print sizes I want it to hold. In my case, I had a lot of 8 x 10 photos to keep, so I bought a package of 8 x 10 sheets, as well as some that held other nonstandard-size photos.

The custom frame I purchased from SendAFrame.com cost about 2/3 less than the price quoted at my local chain store. I got good customer service, fast shipping and a beautiful, high-quality wood frame. The next time I need a custom frame, I’ll go straight to this website.

There was a time when I thought it was silly to own a pet fountain. After all, why couldn’t my cats drink out of a plain old bowl? After someone told me a fountain would encourage my cats to drink more water, possibly preventing urinary tract problems, I decided to give one a try. I discovered the person was right — my cats did consume considerably more water when their bowl was replaced with a fountain.

My first fountain was a Drinkwell Original, the plastic kind with a relatively small footprint. One thing I didn’t like about it was that the parts for mine were not dishwasher-safe (although newer models are), and I grew tired of taking the fountain apart every week and washing everything by hand.

When the time came to replace my old pet fountain, I did a lot of research. One of my key criteria was that the fountain had to be dishwasher-safe (understanding that motors must always be cleaned by hand). This significantly limits your fountain choices. After reading many reviews and spec sheets, I settled on the Drinkwell 360 stainless-steel pet fountain. I found the best price on the Doctors Foster and Smith website. I’ve been using the fountain now for 7 months, so I feel I can offer a fair review of its performance.

The dishwasher-safe factor has proven to be a nice benefit. However, I was unprepared for how much room the fountain would take up in my dishwasher. The bowl has a 12.5-inch diameter, so it takes up about 60 percent of the space in my top dishwasher rack. The interior fountain parts (minus the motor) go in a dishwasher basket in the top rack, taking up another 10 percent of the space in the top. I put the fountain insert on the bottom, where it takes up about 20 percent of the available space. In other words, don’t expect to get a lot of other dishes washed when running the pet fountain through the machine.

The 360 holds a gallon of water, while the Drinkwell Original holds 50 ounces. However, you can buy an optional reservoir for the Original, like I had, which automatically refills it as the water level goes down. I do miss the reservoir. With the 360, I have to remember to add to or check the water level daily, which leads me to unplug the fountain if going away on a weekend trip.

The 360 also takes up a lot of space. When it first arrived, my husband referred to it as a “cattle trough.” The Drinkwell Original was less noticeable in our kitchen.

The 360 is slightly harder to assemble then the Original, in my opinion. The first few times I washed it, I had to read the instructions to remember how to put it back together. Once you get the hang of it, though, it is pretty easy. However, even after numerous washings, I still find it very hard to remove the filter cover. I worry that I will break it one day trying to pry it off.

The big question is: if I had to do it again, would I purchase the Drinkwell 360? Probably not, mainly due to the ineffectiveness of the filters. I feel like I have to wash this fountain more frequently than I did the Drinkwell Original. If I purchase a second pet fountain, I will likely try a dishwasher-safe ceramic model.

Do you use a pet fountain with your cats or dogs? Share your model and experience to provide valuable feedback for others.